The not-for-profit Contemporary Locus invites artists to make site-specific interventions in the public realm of the city of Bergamo in northern Italy. For the 11th edition of Contemporary Locus, curated by Paola Tognon, the Dreams’ Time Capsule project took place in the Monastery of Carmine, created in the twelfth century, and which his home now to the Teatro Stabile of Bergamo.
The inflatable installation travelled directly from the Yorkshire Sculpture Park to the middle of the cloister of the monastery, gathering for nine days the attention of the citizens of Bergamo, whose positive reaction is demonstrated by the 290 dream recordings they provided.
The opening of the capsule was accompanied by a talk Sonno/Sogno (Sleep/Dream) with Alessandro Oldani (neurologist at the Sleep Center of the Scientific Institute San Raffaele, Milan), Sonia Giorgi (psychotherapist, ARPA member), Paola Tognon (curator of Contemporary Locus), and the artist Eva Frapiccini who created the capsule. The talk focused on sleep and dreams and included lively audience participation. It was wide ranging and covered many topics. A particular theme in the talk was the specific nature of dreams as either passive or active actions, experienced or created by individuals.

Over the nine days, the participatory event also included a series of laboratories for children and schools.

Thanks to Contemporary Locus (Paola Tognon, Francesca Ceccherini, and Elisa Bernardoni), the great family of the Teatro Stabile of Bergamo, and the city of Bergamo, the audio archive has reached about 2086 audio recordings of dream encounters. 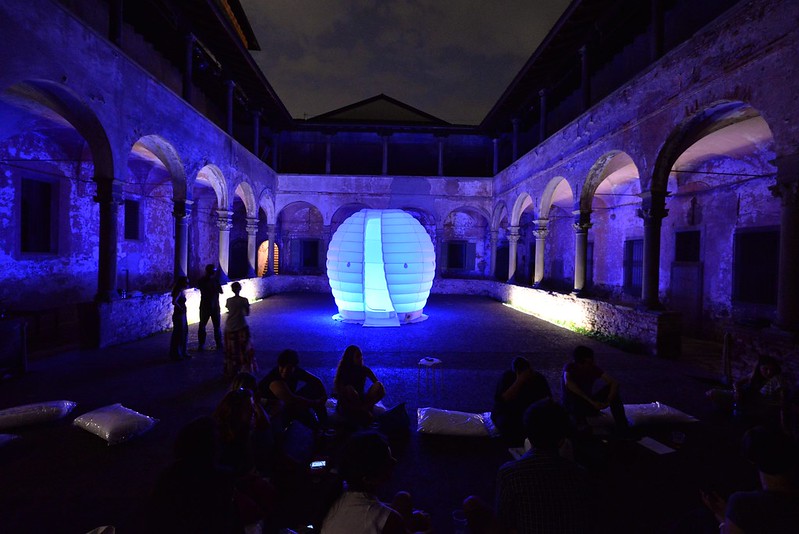 The Dreams’ Time Capsule project was hosted at the Castello di Rivoli Museo d’Arte Contemporanea in Rivoli in Italy, from June to September 2014.

Eva Frapiccini was invited to participate in the group exhibition Ritratto dell’ Artista da Giovane | Portrait of the artist as a Young (Wo)man, curated by Marcella Beccaria. The exhibition explored the remarkable development of contemporary art in Italy over the last ten years, and included 25 artists from the latest generations to be promoted by the museum thanks to the generous contribution of the Castello’s Friends. In the same exhibition, there was a selection of the work in progress Dream Diary, in which Frapiccini used some of the dreams from the Dreams Time Capsule project’s audio archive.

From 3rd to 6th November 2011, during the Artissima Art Fair in Turin, an experimental version of the Dreams’ Time Capsule was exhibited at the Piazza Maria Teresa. The installation was designed in collaboration with the architecture studio Plastique Fantastique in Berlin as a test-study structure to be used only once.

The public installation was a satellite of the solo show Museum Caneira | The physics of the possible by the artist Eva Frapiccini at the Peola Simondi Gallery (former Alberto Peola Gallery). During the three-day-long presentation, almost one hundred dream testimonies from a cross-section of the population were collected. Many generations, and nationalities were represented, and the initiative attracted a good public response, including feedback from visitors who would not normally engage with contemporary art.

We want to say thanks to all the volunteers and collaborators who helped us to join this goal.